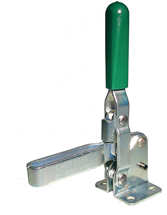 Toggle clamps have specifications in terms of holding capacity and clamping force. It’s important to distinguish the difference between these two concepts and to know how they are measured in order to make the best decision when choosing clamps for each application. 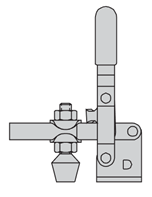 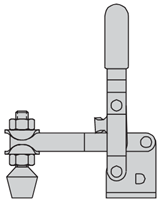 The holding capacity specified for each toggle clamp refers to the maximum force that the spindle on the clamp can exert without deforming permanently. It is important to take into account that the maximum force applied to the toggle clamps is when the spindle is positioned in the closest point to the handle, and it’s said capacity will be lower at the farthest end of the handle.

The clamping force is usually less than the defined holding capacity. Here we refer to the force applied to the par to be fastened when closing and securing with the toggle clamp. This allows the clamps to have sufficient capacity to withstand the external forces that occur in the cutting process of the part. The actual clamping force depends on several factors:

In most cases about half the clamping capacity can be applied manually with a medium effort.